Source: edited from Wikipedia. References to be followed up and expanded as part of my exploration of experimental typography.

Concrete, pattern, or shape poetry is an arrangement of linguistic elements in which the typographical effect is more important in conveying meaning than verbal significance. As such, concrete poetry relates more to the visual than to the verbal arts and there is a considerable overlap in the kind of product to which it refers.

It is difficult to define:”a printed concrete poem is ambiguously both typographic-poetry and poetic-typography” (Houédard). Works cross artistic boundaries into the areas of music and sculpture, or can alternatively be defined as sound poetry, visual poetry, found poetry and typewriter art.

Despite blurring of artistic boundaries, however, concrete poetry can be viewed as taking its place in a predominantly visual tradition stretching over more than two millennia that seeks to draw attention to the word in the space of the page, and to the spaces between words, as an aid to emphasising their significance.

Shaped poetry was popular in Greek Alexandria during the 3rd and 2nd centuries BCE. 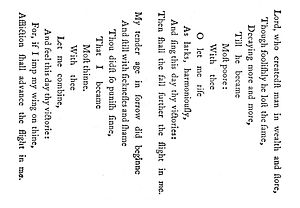 creation of images of natural objects without directly breaking the prohibition of creating “graven images” that might be interpreted as idolatry.

During the early 1950s two Brazilian artistic groups producing severely abstract and impersonal work were joined by poets linked to the São Paolo magazine Noigrandes who began to treat language in an equally abstract way. Their work was termed “concrete poetry” after they exhibited along with the artists in the National Exhibition of Concrete Art (1956/57). The poets included Augusto de Campos, Haroldo de Campos and Décio Pignatari, who were joined in the exhibition by Ferreira Gullar, Ronaldo Azeredo and Wlademir Dias Pino from Rio de Janeiro. In 1958 a Brazilian concrete poetry manifesto was published and an anthology in 1962.

Houedard: inspired by 1962 publication in The Times Literary Supplement of a letter from the Brazilian E.M. de Melo e Castro. His work was  produced principally on the typewriter but approximates more to painterly and sculptural procedures.

Ian Hamilton Finlay :Ian Hamilton Finlay’s concrete poetry began on the page but then moved increasingly towards three dimensional figuration and afterwards to site-specific art in the creation of his sculpture garden at Little Sparta. 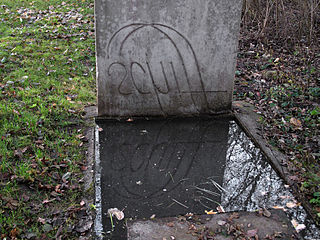 Ian Hamilton Finlay sculpture in Stuttgart, 1975; the word schiff (ship) is carved in reverse and can only be decoded when it floats reflected on water (Wikipedia)

Edwin Morgan Edwin Morgan’s experiments with concrete poetry include elements of found poetry ‘discovered’ by misreading and isolating elements from printed sources. “Most people have probably had the experience of scanning a newspaper page quickly and taking a message from it quite different from the intended one. I began looking deliberately for such hidden messages…preferably with the visual or typographical element part of the point.”

Eugen Gomringer considered that a poem should be “a reality in itself” rather than a statement about reality, and “as easily understood as signs in airports and traffic signs”.

Henri Chopin’s work was related to his musical treatment of the word.

Kenelm Cox (1927-68) was a kinetic artist “interested in the linear, serial aspects of visual experience but particularly in the process of change,” whose revolving machines transcended the static page in being able to express this.

Bob Cobbing, who was also a sound poet, had been experimenting with typewriter and duplicator since 1942. Of its possibilities in suggesting the physical dimension of the auditory process, he declared that “One can get the measure of a poem with the typewriter’s accurate left/right & up & down movements; but superimposition by means of stencil and duplicator enable one to dance to this measure.”

American Minimalist artist Carl André, beginning from about 1958 and in parallel with his changing artistic procedures.

Tom Phillips  visual artist, who uses painterly and decorative procedures to isolate them on the page. In A Humument he explores unintended concordances of meaning.