B or b (pronounced /ˈbiː/, bee) represents the voiced bilabial stop in many languages, including English. In some other languages, it is used to represent other bilabial consonants like v.

was a modified form of a Proto-Sinaitic glyph ⟨

⟩ meaning “house”. The Egyptian hieroglyph for the consonant /b/ had been an image of a foot and calf ⟨

⟩. The Hebrew letter beth ⟨ב⟩ is a separate development of the Phoenician letter. 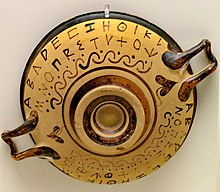 The Greek alphabet on an ancient black figure vessel, with the characteristically angular beta of the time

The Roman ⟨B⟩ derived from the Greek capital beta ⟨Β⟩ via its Etruscan and Cumaean variants. The letter Β had the largest number of highly divergent local forms. Besides the standard form (either rounded or pointed,

), there were forms as varied as

Old English was originally written in runes, whose equivalent letter was beorc ⟨ᛒ⟩, meaning “birch”. Beorc dates to at least the 2nd-century Elder Futhark, which is now thought to have derived from the Old Italic alphabets’ ⟨  ⟩either directly or via Latin ⟨

⟩. These Old English Latin alphabets supplanted the earlier runes, whose use was fully banned under King Canute in the early 11th century. The Norman Conquest popularized the Carolingian half-uncial forms which latter developed into blackletter ⟨

⟩. Around 1300, letter case was increasingly distinguished, with upper-and lower-case B taking separate meanings. Following the advent of printing in the 15th century, Germany and Scandinavia continued to use forms of blackletter (particularly Fraktur), while England eventually adopted thehumanist and antiqua scripts developed in Renaissance Italy from a combination of Roman inscriptions and Carolingian texts. The present forms of the English cursive B were developed by the 17th century.

Many other languages besides English use ⟨b⟩ to represent a voiced bilabial stop.

As /b/ is one of the sounds subject to Grimm’s Law of phonetic transformation, words which have ⟨b⟩ in English and other Germanic languages may find their cognates in other Indo-European languages appearing with ⟨bh⟩, ⟨p⟩, ⟨f⟩ or ⟨φ⟩ instead. For example, compare the various cognates of the word brother.

Connotations in mathematics, science and economics

Numeral: In the system of Greek numerals, beta has a value of 2. Such use is denoted by a number mark: Β′. In Scientific unit notation it is used as a particle and pronounced as a /bIta/

Computing: In computing, the term “beta” is used as (usually) the last testing release (or the preview release) in the software release life cycle before the “release” version. Beta versions often have a version number of the form “0.n“, (or “build number“). Typically it is the last version before a version of a software is fully released to all its actual customers.

Mathematics: Beta is often used to denote a variable in mathematics and physics, where it often has specific meanings for certain applications, such as representing beta radiation. In regression analysis, ⟨B⟩ symbolizes nonstandardized partial slope coefficients, whereas ⟨β⟩ represents standardized (standard deviation-score form) coefficients; in both cases, the coefficients reflect the change in the criterion Y per one-unit change in the value of the associated predictor X. β is sometimes used as a placeholder for an ordinal number if α is already used.

Spaceflight: Beta angle describes the angle between the orbit plane of a spacecraft or other body and the vector from the sun.

Rock climbing terminology The term “beta” refers to advice on how to successfully complete a particular climbing route, boulder problem, or crux sequence.