Evolution of the letterform

In English, the letter appears either alone or in some digraphs. Alone, it represents

The digraph ⟨ng⟩ represents either

The digraph ⟨gh⟩ (which mostly came about when the letter Yogh, which took various values including /ɡ/, /ɣ/, /x/ and /j/, was removed from the alphabet) now represents a great variety of values, including

The digraph ⟨gn⟩ may represent

The range of typographic forms that the letter G currently takes have a number of different origins:

The letter ‘G’ was introduced in the Old Latin period as a variant of ‘C’ to distinguish voiced /ɡ/ from voiceless /k/. Hempl (1899) proposed that ‘G’ was a direct descendant of zeta. Zeta took shapes like ⊏ in some of the Old Italic scripts; the development of the monumental form ‘G’ from this shape would be exactly parallel to the development of ‘C’ from gamma. He suggests that the pronunciation /k/ > /ɡ/ was due to contamination from the also similar-looking ‘K’. 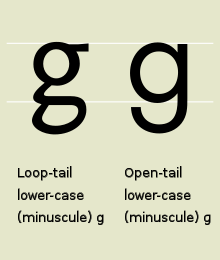 Typographic variants include a double-story and single-story g.