Edited and extended from Wikipedia

Islamic calligraphy, is the artistic practice of handwriting and calligraphy, based upon the alphabet in the lands sharing a common Islamic cultural heritage. It includes Arabic , Ottoman, and Persian calligraphy. It is known in Arabic as khatt Islami (خط اسلامي), derived from the word ‘line’, ‘design’, or ‘construction’.

As Islamic calligraphy is highly venerated, most works follow examples set by well established calligraphers, with the exception of secular or contemporary works. In antiquity, a pupil would copy a master’s work repeatedly until their handwriting is similar.

The most common style is divided into:

With the spread of Islam, the Arabic script was established in a vast geographic area with many regions developing their own unique style. From the 14th century onward, other cursive styles began to developed in Turkey, Persia, and China.

5) Sini is a style developed in China. The shape is greatly influenced by Chinese calligraphy, using a horsehair brush instead of the standard reed pen. A famous modern calligrapher in this tradition is Hajji Noor Deen Mi Guangjiang.

The traditional instrument of the Islamic calligrapher is the qalam, a pen normally made of dried reed or bamboo; the ink is often in color, and chosen such that its intensity can vary greatly, so that the greater strokes of the compositions can be very dynamic in their effect. Some styles are often written using a metallic-tip pen. 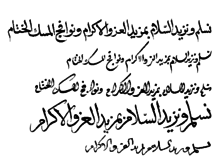 Islamic calligraphy is applied on a wide range of decorative mediums other than paper, such as tiles, vessels, carpets, and inscriptions. Before the advent of paper, papyrus and parchment were used for writing. The advent of paper revolutionized calligraphy. While monasteries in Europe treasured a few dozen volumes, libraries in the Muslim world regularly contained hundreds and even thousands of books.

Coins were another support for calligraphy. Beginning in 692, the Islamic caliphate reformed the coinage of the Near East by replacing visual depiction with words. This was especially true for dinars, or gold coins of high value. Generally the coins were inscribed with quotes from the Qur’an.

By the tenth century, the Persians, who had converted to Islam, began weaving inscriptions onto elaborately patterned silks. So precious were calligraphic inscribed textiles that Crusaders brought them to Europe as prized possessions. A notable example is the Suaire de Saint-Josse, used to wrap the bones of St. Josse in the Abbey of St. Josse-sur-Mer near Caen in northwestern France.

Kufic is the oldest form of the Arabic script developed around the end of the 7th century in the areas of Kufa, Iraq, from which it takes its name. It was the main script used to copy Qur’ans from the 8th to 10th century and went out of general use in the 12th century when the flowing naskh style become more practical, although it continued to be used as a decorative element to contrast superseding styles.

The Archaic Kufi consisted of about 17 letters without diacritic dots or accents. Afterwards, dots and accents were added to help readers with pronunciation, and the set of Arabic letters rose to 29.

There were no set rules of using the Kufic script; the only common feature is the rigid, angular, linear strokes and shapes of the characters – a modified form of the old Nabataean script. Through use in different regions, countries and calligraphers, the style later developed into several varieties, including floral, foliated, plaited or interlaced, bordered, and squared kufi.Common varieties include square Kufic, a technique known as banna’i. Contemporary calligraphy using this style is also popular in modern decorations.

Decorative kufic inscriptions are often imitated into pseudo-kufics in Middle age and Renaissance Europe. Pseudo-kufics is especially common in Renaissance depictions of people from the Holy Land. The exact reason for the incorporation of pseudo-Kufic is unclear. It seems that Westerners mistakenly associated 13–14th century Middle-Eastern scripts as being identical with the scripts current at the time of Christ, and thus found natural to represent early Christians in association with them.

Muhaqqaq script in a 14th-century Qur’an from the Mamluk dynasty.

The use of cursive script coexisted with kufic, but because in the early stages of their development they lacked discipline and elegance, cursive were usually used for informal purposes. With the rise of Islam, new script was needed to fit the pace of conversions, and a well defined cursive called naskh first appeared in the 10th century. The script is the most ubiquitous among other styles, used in Qur’ans, official decrees, and private correspondence. It became the basis of modern Arabic print.

Standardization of the style was pioneered by Ibn Muqla (886-940 A.D.) and later expanded by Abu Hayan at-Tawhidi (died 1009 A.D.) andMuhammad Ibn Abd ar-Rahman (1492–1545 A.D.). Ibn Muqla is highly regarded in Muslim sources on calligraphy as the inventor of the naskh style, although this seems to be erroneous. However, Ibn Muqla did establish systematic rules and proportions for shaping the letters, which use ‘alif as the x-height.

Variation of the naskh includes:

A cursive style developed in the 14th century by Mir Ali Tabrizi to write the Persian language for literary and non-Qur’anic works. Nasta’liq is thought to be a later development of the naskh and the earlier ta’liq script used in Iran. The name ta’liq means ‘hanging’, and refers to the slightly steeped lines of which words run in, giving the script a hanging appearance. Letters have short vertical strokes with broad and sweeping horizontal strokes. The shapes are deep, hook-like, and have high contrast. 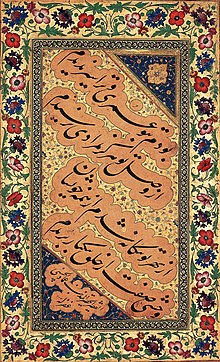 In the 17th century Morteza Gholi Khan Shamlou and Mohammad Shafi Heravi created a new genre called cursive Nastaʿlīq Shekasteh Nastaʿlīq. Almost a century later, Abdol-Majid Taleqani, who was a prominent artist at the time, brought this genre to its highest level. This calligraphic style is based on the same rules as Nas’taliq. However, cursive Nas’taliq has a few significant differences: it provides more flexible movements, and it is slightly more stretched and curved. Yadollah Kaboli is one of the most prominent contemporary calligraphers within this style.

is a cursive style of Arabic calligraphy developed during the reign of the early Ottoman Turks in the 16th and early 17th centuries. It was invented by Housam Roumi and reached its height of popularity under Süleyman I the Magnificent (1520–1566). Spaces between letters are often narrow, and lines ascend upwards from right to left. Larger variation called djali are filled with dense decorations of dots and diacritical marks in the space between, giving it a compact appearance. Diwani is difficult to read and write due to its heavy stylization, and became ideal script for writing court documents as it insured confidentiality and prevented forgery.

How to do it