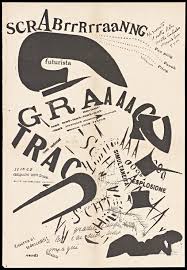 Marinetti is known best as the author of the Futurist Manifesto, which he wrote in 1909. It was published in French on the front page of the most prestigious French daily newspaper, Le Figaro, on 20 February 1909. In The Founding and Manifesto of Futurism, Marinetti declared that:

“Art, in fact, can be nothing but violence, cruelty, and injustice.”

Futurism had both anarchist and Fascist elements; Marinetti later became an active supporter of Benito Mussolini.

Marinetti, who admired speed, had a minor car accident outside Milan in 1909 when he veered into a ditch to avoid two cyclists. He referred to the accident in the Futurist Manifesto: the Marinetti who was helped out of the ditch was a new man, determined to end the pretense and decadence of the prevailing Liberty style. He discussed a new and strongly revolutionary programme with his friends, in which they should end every artistic relationship with the past, “destroy the museums, the libraries, every type of academy”. Together, he wrote, “We will glorify war—the world’s only hygiene—militarism,patriotism, the destructive gesture of freedom-bringers, beautiful ideas worth dying for, and scorn for woman”.

The Futurist Manifesto was read and debated all across Europe, but Marinetti’s first ‘Futurist’ works were not as successful. In April, the opening night of his drama Le Roi bombance (The Feasting King), written in 1905, was interrupted by loud, derisive whistling by the audience… and by Marinetti himself, who thus introduced another element of Futurism, “the desire to be heckled”. Marinetti did, however, fight a duel with a critic he considered too harsh.

His drama La donna è mobile (Poupées électriques), first presented in Turin, was not successful either. Nowadays, the play is remembered through a later version, named Elettricità sessuale(Sexual Electricity), and mainly for the appearance onstage of humanoid automatons, ten years before the Czech writer Josef Čapek would invent the term “robot”. In 1910, his first novel Mafarka il futurista was cleared of all charges by an obscenity trial.

That year, Marinetti discovered some allies in three young painters, (Umberto Boccioni, Carlo Carrà, Luigi Russolo), who adopted the Futurist philosophy. Together with them (and with poets such as Aldo Palazzeschi), Marinetti began a series of Futurist Evenings, theatrical spectacles in which Futurists declaimed their manifestos in front of a crowd that in part attended the performances in order to throw vegetables at them.

The most successful “happening” of that period was the publicization of the “Manifesto Against Past-Loving Venice” in Venice. In the flier, Marinetti demands “fill(ing) the small, stinking canals with the rubble from the old, collapsing and leprous palaces” to “prepare for the birth of an industrial and militarized Venice, capable of dominating the great Adriatic, a great Italian lake”.

About the same time Marinetti edited an anthology of futurist poets. But his attempts to renew the style of poetry did not satisfy him. So much so that, in his foreword to the anthology, he declared a new revolution: it was time to be done with traditional syntax and to use “words in freedom” (parole in libertà). His sound-poem Zang Tumb Tumb exemplifies words in freedom. Recordings can be heard of Marinetti reading some of his sound poems: Battaglia, Peso + Odore(1912) Dune, parole in libertà (1914) La Battaglia di Adrianopoli (1926) (recorded 1935)

Many Italian Futurists supported Fascism in the hope of modernizing a country divided between the industrialising north and the rural, archaic South. Like the Fascists, the Futurists were Italian nationalists, radicals, admirers of violence, and were opposed to parliamentary democracy. Marinetti founded the Futurist Political Party (Partito Politico Futurista) in early 1918, which was absorbed into Benito Mussolini‘s Fasci di combattimento in 1919, making Marinetti one of the first members of the National Fascist Party. He opposed Fascism’s later exaltation of existing institutions, calling them “reactionary”, and walked out of the 1920 Fascist party congress in disgust, withdrawing from politics for three years; but he supported Italian Fascism until his death in 1944. The Futurists’ association with Fascism after its triumph in 1922 brought them official acceptance in Italy and the ability to carry out important work, especially in architecture. After the Second World War, many Futurist artists had difficulty in their careers because of their association with a defeated and discredited regime. Marinetti sought to make Futurism the official state art of Fascist Italy but failed to do so.

Mussolini was personally uninterested in art and chose to give patronage to numerous styles and movements in order to keep artists loyal to the regime. Opening the exhibition of art by the Novecento Italiano group in 1923, he said, “I declare that it is far from my idea to encourage anything like a state art. Art belongs to the domain of the individual. The state has only one duty: not to undermine art, to provide humane conditions for artists, to encourage them from the artistic and national point of view.”[26] Mussolini’s mistress, Margherita Sarfatti, who was as able a cultural entrepreneur as Marinetti, successfully promoted the rival Novecento group, and even persuaded Marinetti to sit on its board. Although in the early years of Italian Fascism modern art was tolerated and even embraced, towards the end of the 1930s, right-wing Fascists introduced the concept of “degenerate art” from Germany to Italy and condemned Futurism.

Marinetti made numerous moves to ingratiate himself with the regime, becoming less radical and avant-garde with each. He moved from Milan to Rome to be nearer the centre of things. He became an academician despite his condemnation of academies, married despite his condemnation of marriage, promoted religious art after the Lateran Treaty of 1929 and even reconciled himself to the Catholic Church, declaring that Jesus was a Futurist.